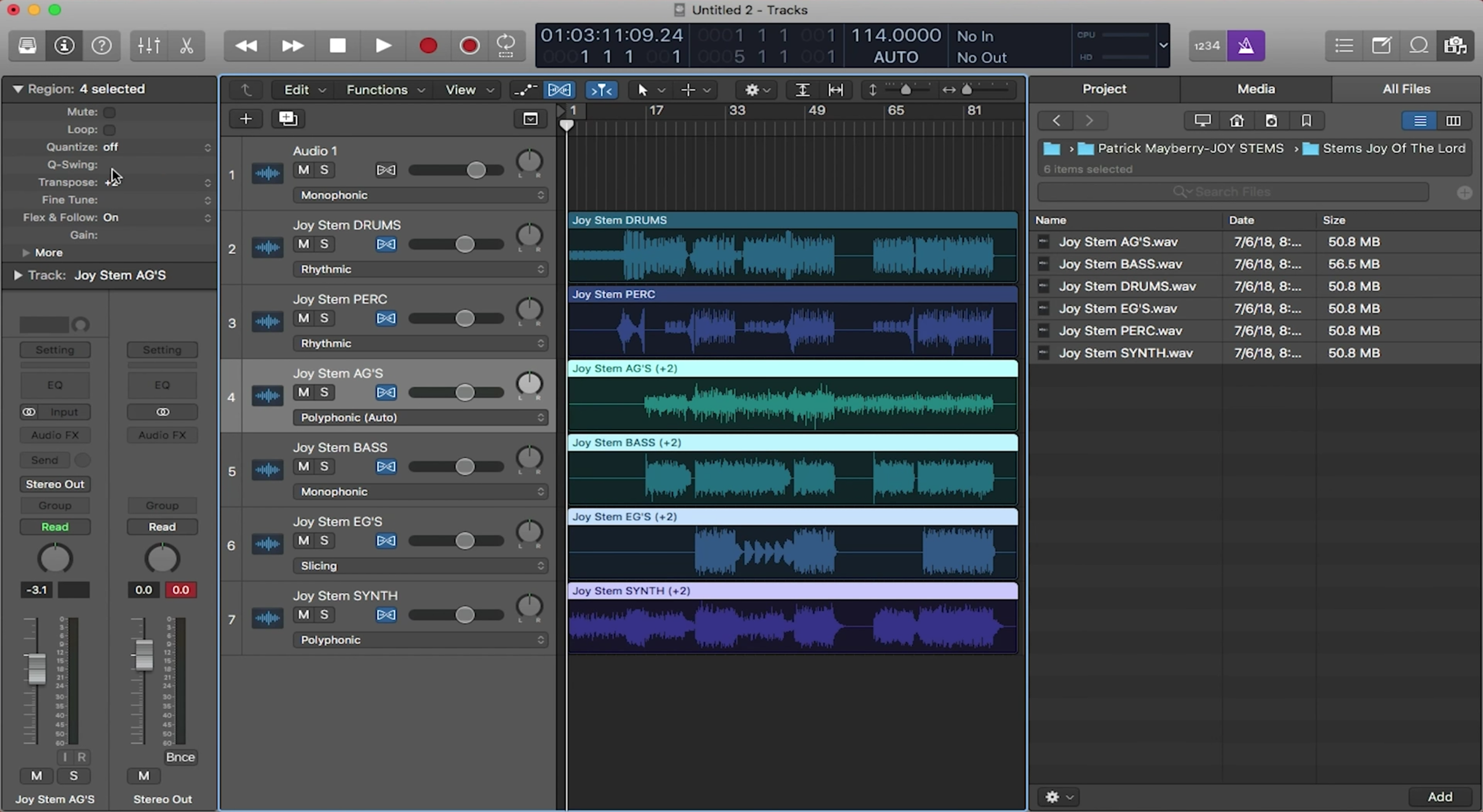 Are you interested in producing your own tracks? Logic Pro is Apple’s digital audio workstation and is an application that worship leaders can use to produce and run their tracks. Logic’s simplistic design makes it user-friendly and is great for beginner-level producers. This blog series on Logic Pro focuses on the features you need to know to get started!

Be sure to check out the first two blogs in the series:
1. Introduction to Using Logic Pro in Worship
2. Adding Tracks and Using Smart Tempo in Logic

Flex Time is a great feature in Logic that helps you change the tempo and key of your tracks. While similar to Logic’s Smart Tempo, Flex Time takes it on a little differently. There isn’t a right or wrong choice here so feel free to use whichever you are more comfortable with.

To get started using Flex Time, you must first enter in your tracks and input the correct tempo of your song as the project tempo. Next, turn on Flex by clicking the Flex button right above your tracks (circled in the picture below). When doing so, each track will show a dropbox menu with different Flex including monophonic, polyphonic, rhythmic, etc. For each track, choose which options best describes the track’s audio. For example, a drum track should be set to rhythmic, a bass track should be monophonic and an acoustic guitar track should be polyphonic. Make sure that the blue flex button is lighting up in each track. Now that your tracks are all flexing in the correct modes, you can now change the project tempo up in the control bar and all the flexed tracks will change with it.

Changing the Pitch of Your Tracks

When your tracks are flexed, you have the option to change the key as well. To do so, open the inspector by clicking the inspector button up in the left side of the control bar (circled in the picture below). To change the key of your song, highlight all the tracks except for your click, cues and all rhythmic tracks such as drums and percussion. Next, go to the region inspector section in the inspector tab, and enter the desired number where it says transpose. Each number represents a half step. So for example, if your song is in G and you want to transpose it to A, type in “2” and your tracks will transpose up 2 half steps. If you are in D and want to transpose down to C, type in “-2” so that Logic transposes the tracks down two halfsteps.

And it’s as simple as that! Logic makes it easy to change the tempo and key of your tracks with its Flex feature

This doesn’t work with version 10.4.8, as you are restricted to multiples of 12 in the transpose setting.

We haven’t experienced this. Can you send us a screenshot of what you are seeing in Logic that is not allowing you to transpose the track?

It does work. Double click and it lets you enter your own number

Hi Andrea, you just need to click and drag instead of just clicking.

Every time I do this, exactly like on this video, it shortens the tracks. Using Behold Him by Paul B, song is something like 141 bars but as soon as I either, turn the flex option ON, or just go into the inspector and transpose the key there, it immediately shortens that track to 95 bars. Trying to go from Eb to G, currently using Logic Pro X v10.6. I’m going crazy, heeeeeeelllllp 😂 I’m sure its an easy fix and you know exactly what to do! 🙂

If the audio files have embedded tempo information then this may be causing them to stretch improperly. Try bouncing each of the audio files to a new audio track in Logic, and turn on Flex for those tracks and see if you’re able to have success!

If this doesn’t work, email us at support@loopcommunity.com.